WHAT FRENCH FOOD IS … NOT FRENCH PART DEUX

I can already feel your apprehension, after the “Foie Gras” what is he going to come up with?
So let’s start with a riddle:
It comes in hundreds of flavours from classic to crazy
It has to be handled with care
Marie Antoinette loved their early version
You probably got it by now, my next victim are Macarons (not to be mistaken with their American cousin the Macaroons with coconuts).

So then, where does it come from?
Let’s give it a thought, Macaron are made of egg whites, sugar, almond powder and originally a hint of orange blossom, those ingredients (almond and orange blossom) are not really French nor European are they? The first Macarons came from Persia (Iran) where it existed under the shape of a large single cookie with a crackled top.
A first version, probably brought back to Greece by Alexander’s army, exists in modern Greece with sliced almonds on top of it.
But, for Europe we had to wait more, we had to wait for Marco Polo’s “Silk Road” to allow traders to move back and forth between the Far East and Italy.

The first written recipe of the macaron in Italy dates back to 1533 with Catherine of Medicis but in France it’s mentioned in Rabelais’ “Book Four” in 1552 and is located in Eastern France.

The Macaron in France goes through 4 major evolutions
The early age’s texture is closer to marzipan, a single cookie, it has no other flavour but the presence of Almonds (an available yet expensive ingredient) tends to reserve the little cookie to the French Elite, as a matter of fact, the Sun King Louis the XIVth is the first to officially give the Macarons their Nobility Letter when they are served for his wedding in 1660, after moving to Versailles in 1682 the Macaron is part of the king’s menu. 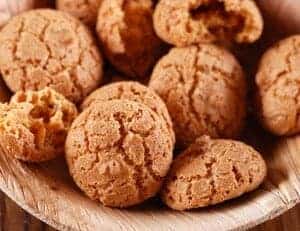 In 1830 the first Macaron sandwiches were created, the two cookies are then stuck with jams or fruits, butter with spices (often cinamon) or liqueur. 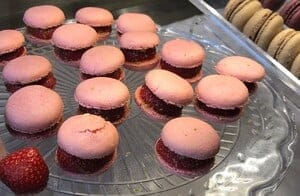 In 1854, a pastry chef from Boulay in the Lorraine region (East of France) inspired by the unleavened bread (you know the one you make the Host from) improves the recipe of the Macaron to give them the smooth surface. 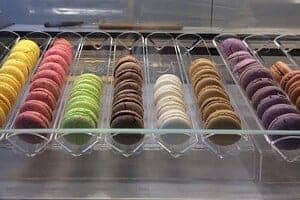 A legend is born in 1930, Pierre Desfontaines, the Grandson of Mr Ladurée gets the idea of using a creamy ganache (cacao with cream and a flavouring) to stick the two smooth macarons together and to use colours to make them standout, the Macaron à la Parisienne is born !!

So you see even though Macaron is not born in France it has been around for almost as long as Christoph Columbus discovered the Americas.

The little lip that you can see on the Macaron à la Parisienne is called the foot of the Macaron and is often one of the failures of Macaron amateur chefs.
A fun fact for movie lovers, Sofia Coppola’s “Marie Antoinette” depicts the Queen of France enjoying Macarons but the ones shown in the movie are an anachronism and will only be created in 1930 so nearly 140 years after the poor Queen lost her head for a totally different reason.

If you want to enjoy Macarons both our Montmartre and St Germain will take you to a great place to try them.

ALLARD – OVERPRICED AND LIVING OFF PAST GLORY

Weird French dishes and where to get them

Ways to be Romantic in Paris for Valentine’s...

What is the Pâte à choux

What English people ate during WWII

What French people ate during WWII

Marmite, a Love and Hate story

Jeanne A: Good in parts but ultimately disappointing...