It is common practice for waiters in Rome to recommend the dish Cacio e Pepe as part of their secret food tours. In addition, it is fairly uncommon for visitors to be confused by the term. However, I can confidently say that Cacio e Pepe is among the finest pasta dishes Rome has ever produced. And there are just three of them! Pasta, cheese, and pepper are a tasty combination.

Similar to Italy, cheeses have a long and illustrious history. Pecorino is a cheese manufactured from the milk from sheep and is also referred to as cacio in Roman dialect. This cheese has a long history of production around the Mediterranean, North Africa, and Asia Minor coasts.

There is evidence to suggest that pecorino cheese was ingested three thousand years before the birth of Christ. The method of making this cheese dates back to the time of the Ancient Greeks. Besides, the Romans introduced cheese to the rest of the world by spreading it across their empire, like Philadelphia on a bagel.

What was the Source of Black Pepper for the Romans?

The second component, pepper, dates back to prehistoric times and has been used ever since. Although the Egyptians utilized it, as evidenced by the discovery of black pepper on the mummified remains of Ramses II, who lived in 1212 BC.

Approximately 2,500 years ago, Greece and the Roman Empire were introduced to the first places of pepper. It was a rare and expensive spice frequently utilized as a kind of currency due to its high value.

In 408 BC, King Alarico of Visgoti set his sights on Rome as his next conquest. Instead, the Romans engaged in form of commerce with this despot. In return for the king’s promise to refrain from attacking Rome, he was compensated with 3,000 kilograms of pepper, 5,000 pounds of gold, and a piece of land.

check out our amazing food tours in Las vegas

What kind of Pasta would go best with Cacio e Pepe?

Although spaghetti is integral to the secret food tours to the traditional Pasta used for Cacio e Pepe, the sauce has become increasingly versatile. It is now frequently served with virtually any variety of Pasta. Different types of Pasta. These include tonnarelli, egg pasta, and rigatoni, frequently used to create variations.

Spaghetti Alla chitarra and tagliolini have become popular replacements for traditional spaghetti in recent years due to the dish’s trend toward a creamier texture. Purists have criticized Tonnarelli (and egg noodles) for being too porous and soaking up too much sauce.

The creamy component is of interest to these food tours that you need to understand. It is known that the key to a successful dish of Cacio e Pepe is not only the quality of the ingredients but also the skill with which the chef prepares it. Mixing the ingredients together to create the well-known “cremina” is an essential step in preparing this classic example of Roman cuisine.

Finding the cheese-to-cooking-water ratio that produces the desired results is not at all simple. Suppose you want the components to come together into a smooth cremina. In that case, you will need to add the appropriate quantity of cooking water while alternating the addition of pecorino cheese to achieve the desired consistency.

Many people believe that the ideal technique to complete cooking Cacio e Pepe is in a pan because this allows the spaghetti to release starch, which is necessary for the sauce to combine perfectly. It is one of the main reasons why this is the recommended method.

Besides, it is essential to remember that the original recipe for cremina does not call for the use of oil, cream, or butter in its preparation. Hence, the appropriate components, dosage, and method must be utilized.

Does Pasta have an Italian Origin?

It is a resounding “NO!” Humans have also consumed Pasta for quite some time. Pasta first appeared in the archaeological record in northwest China when a rice spaghetti dish was prepared four thousand years ago. Most common grains in Europe and the Middle East were unavailable to the Chinese.

Pasta resembling what we eat today was first made by the Etruscans, but it was quickly copied by the Greeks, the Romans, and the Arabs. The ancient Romans called the dough made by kneading flour and water together and cutting it into strips Laganum. What we currently call fettuccine is very similar to this.

As such, this is why Cacio e Pepe has been mastered for centuries. When shepherds spent months at a time in the excellent outdoors herding, this was a regular staple food. The staples of a shepherd’s bag were a piece of aged pecorino, some dry pasta, and some pepper.

The ingredients for a hearty lunch were at hand, and with a bit of lard to grease the iron skillets, they could turn out delicious.

Check out our food tours in Hanoi Our mouth-watering, delightfully disruptive culinary experiences will leave you wanting more.

Why it was a Perfect Recipe

It was perfect for their long voyages because pecorino does not spoil readily.
Pepper’s thermogenic properties kept the shepherds warm during their nighttime patrols in the cold.
They could keep going because the Pasta gave them the carbs and calories they needed.

The dish’s first iteration has been modified since it was first created. Many different recipes may be made with Pasta, oil, and Parmigiano-Reggiano, like bucatini or rigatoni. However, you should not throw away your time.

It is impossible to make the traditional flavor of Cacio e Pepe taste better by using any other ingredients as a substitute.

The original recipe calls for only three components: spaghetti type 5, ground black pepper, and shredded Roman Pecorino DOP cheese. When the spaghetti is cooking in salted water, combine the shredded pecorino and the pepper in a bowl made of glass or metal.

When the Pasta has reached the firmness you want, take it from the pan, not with a colander but with a spoon explicitly designed for Pasta. The water from the Pasta that has been salted should not be thrown away.

In a large bowl, combine the spaghetti, pecorino, and pepper and stir until combined. Mix in two serving spoons of the pasta water that has been reserved and stir it in. The Pasta is finished al dente when the hot water is added while it is being tossed. It allows the cheese and pepper to equally coat all of the Pasta and complete the cooking of the Pasta. It is time to begin assisting others right away.

Making authentic Cacio e Pepe is a breeze, whether you have never made Pasta before or are a seasoned chef with an Italian restaurant on speed dial. If you want perfect Cacio e Pepe, try these techniques. 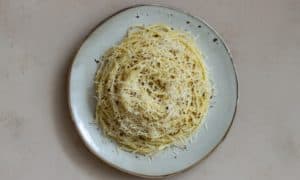 1. Make sure you are using the good stuff. You can tell the difference in the quality of the butter, cheese, and Pasta you use while making a Cacio e Pepe recipe.

2. Prepare salty pasta water. Since the only sources of salt in this dish are the noodles and the pasta boiling water, you’ll want to season your water generously.

3. To have a more delicate cheese texture, grate it. Use freshly grated, high-quality Parmesan cheese for the smoothest sauce. A Microplane or other super-fine grater can be used to grind the cheese shortly before adding it to the sauce.

4. Make sure to store it properly. To keep your remaining Cacio e Pepe warm for up to three more days, bring it to room temperature before keeping it in an airtight container in the fridge.

5. Reheat it in a saucepan. Add the remaining Pasta and a little water to a skillet to reheat it. Warm the food up entirely over medium heat.

What Would be the Ideal Wine to Pair with Cacio e Pepe?

Pairing the saltiness of the cacio and the spiciness of the pepe with a well-known Lazian white that is balanced, structured, and full-bodied would be delicious. Falesco Poggio dei Gelsi Est! is the name of the wine.

The wine features greenish glints in the glass and is a straw yellow tint overall. White musk, hawthorn, wisteria, ripe pears, pineapples, and golden apples can all be detected. v the wine’s harmony.

The taste is commensurate with its aromatic profile. The finish of Poggio Dei Gelsi is moderately persistent and characterized by its smoothness and harmony. There’s a little bit of almond and plum in the finish.

The grapes used to make Poggio Dei Gelsi are a mix of Trebbiano, Roscetto, and Malvasia in equal parts.

The history of the dish Cacio e Pepe hints at a joyous comeback to the use of peppercorns as a prized component of the dish. It was stated that Emperor Nero enjoyed honey on bread sprinkled with cracked black pepper. This was centuries before the idea of “black pepper” was reduced to old, bland, grey granules scattered onto a shepherd’s pie.

So why not adopt a fresh approach and try eating like a Roman instead? Peppercorns should not be an afterthought. Instead, you should remove them from the mill and make them the dish’s focal point.

Our Picks for the Top 10 Best Restaurants in Krakow

A Guide to the Best Food Markets in...

The history of the Negroni is as fascinating...

Our Picks for the Top 10 Best Restaurants...

Eating in Rome on a Budget

Discovering the Different Types of Donuts Around the...