Best Neighbourhood in Paris to get pastries part 2

The second best neighbourhood for pastry in my opinion is Montmartre and you can join us to have a closer taste.

We leave the classy look of the cakes to go back to the roots of pastry, in the district of the rue des Abbesses you hit a nest of fantastic bakeries and artisans (all venues prepare their products on the spot with high quality ingredients and several batch a day to always be freshly baked)

To begin with THE basic, the Choux pastry (the one you find in the “Eclair”, “Paris Brest”, “Croque en bouche” … etc), but first a little history.
Pâte à choux pastry is a misinterpretation of the word Pâte à Chaud, choux and chaud sounds very close to one another, Pâte à Chaud means warm dough and this is where the misunderstanding lies.
In Italy a chef called Poppelini wanted to make a dough that would stay put even after cooling down, you all have that feeling of happiness when seeing your cake swelling in the oven just to be crushed by its deflated look once cool, so Poppelini decided to prepare his dough on the stove therefore half cooking, it meant that after swelling for the first part of the baking it would then set still in the oven, after cooling off it would still be as pretty as it was in the oven. But the round shape of the pâte à chaud reminding the shape of the cabbage and its close enough sound from chaud to choux made everybody quickly start calling it Pâte à Choux. 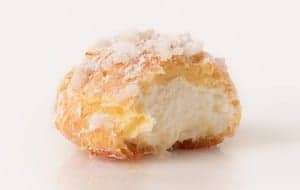 On 27 Rue Durantin, 75018 Paris you have a hidden store “Les Choupettes de Chouchou” that exclusively bakes Choupettes their creation born from a chouquette and a cream puff, filled with homemade whipped creamed, it will cost you $2 to get one of the organic and freshly baked choupette. Beware all is fresh and in limited quantities to get there too late or you will miss it.

Just around the corner from the Choupette at 4 Rue Tholozé, 75018 Paris two Korean ladies owner of the “Chocolaterie Iléné” will wait for you with wonderful chocolates and Macaron, they both spent several decades in France mastering the craft of Macaron making and chocolates. They sell two types of macarons, original looking with a cracked aspect or the “macarons à la parisienne” with its smooth surface, they are fully organic and they don’t use coloring agents hence the pastel aspect of their macarons, if available do try for $2.5 the strawberry/pistachio macaron, it is to die for.

Nearby at 9 Rue Ravignan, 75018 Paris, you will find one of the best Madeleine bakers, “Gilles Marchal”, freshly baked everyday through several batches you will likely get them lukewarm. The traditional one is a must and for less than $2 it would be a sin to walk past,
Many other flavours are available and I have a soft spot for the one with the icing on top. 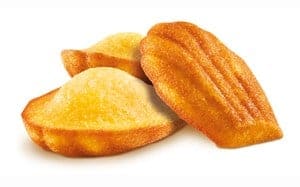 Last but no least, a few steps from “Amelie” famous café les Deux Moulins on 1, rue Constance, 75018 Paris, Gilles Marchal (again) opened the “Compagnie Générale de Biscuiterie de Montmartre” that will delight you with their large selection of freshly baked cookies, you can even see them making them as the shops is actually the factory, a bag of a 100gr cost $8. 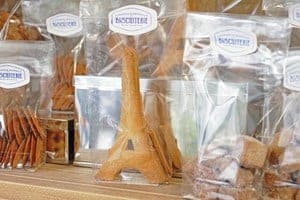 Tea for Two with a Twist